The fantasy of distraction-free typing

To date, I've done much of my Real Writing™ in Microsoft Word. This is chiefly out of necessity. In the benighted humanities, Word is the industry standard for edits and comments, and so if I'm sending drafts to anybody—readers, colleagues, referees—they have to be Word documents. Word, of course, is horrible. Everyone knows this. It's legacy software, bogged down with decades of accreted features for specific use cases, which mostly get in the way of the program's ostensible purpose: word processing. On the occasion that you need one of its niche formatting tools, the tool will be difficult to find and the formatting easy to break. I can drive myself nuts with keeping the formatting just so, only to see the fruits of my labor destroyed when someone opens the document on a PC or an iPad, adds comments, and sends it back to me. Keeping Word formatting from looking terrible is a Sisyphean distraction from the actual act of writing.

To avoid this distraction, I have tried to do my first draft writing in plain text, only moving to Word once revising and formatting can no longer be put off. I did this initially by purchasing an AlphaSmart 3000 for about $15 on eBay a year and a half ago. I was sold on its turn-of-the-century charm, from the translucent green casing (emulating the iMac G3), to the monochrome LCD that displays four lines of text, to the hatch on the underside for three double-A batteries. One marker of its vintage turned out to be less charming: the nasty, nipply, low-travel rubber domes under its keys. The AlphaSmart was intended as a typing tool for kids, and it lends itself to a childlike style of typing: i.e., mashing the keys super hard. It's tolerable at first but quickly gets tedious if you're writing for extended periods. 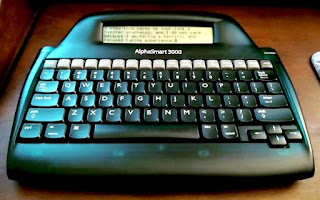 The AlphaSmart is a fun gadget, and it does give you a "distraction-free" writing environment. It does nothing but store and display plain text. Disgusting switches notwithstanding, I stuck with it for a while for this very reason. It has no tools for formatting, and the four-line LCD means you will do very little editing on it either. It is a first draft machine, and it's very satisfying to plug it into your laptop, hit the Send key, and watch the words type themselves into whatever text editor you're going to do the rest of your writing in. This, however, is where the problem comes in: the AlphaSmart doesn't provide tools for anything beyond an initial draft, so its removal of distractions only helps for that initial draft phase. That's helpful, of course—it would stop me from fussing with formatting before I'd written anything substantive—but it still just kicked the can down the road until the first set of revisions.

As I've begun dissertation writing, it's become very clear to me that I need to stay out of Microsoft Word until the last possible minute, not just until after the first draft. So I'm trying now to keep my writing almost entirely in a text editor until I need to move it to Word to send to somebody else. It's taking some work, and it unsolves some problems the AlphaSmart had squared away; there are definite advantages to having a separate device just for writing. It also means that my best formatting option is Markdown, for which I developed an intense dislike several years ago because I had to use it in a web development context with a terrible CMS that frequently escaped tags for no apparent reason and, for less than no apparent reason, refused to recognize HTML tags, so there was often no way to fix broken formatting. But in pursuit of healthier writing habits, I'm giving it the old grad school try.

I've used the "free mode" of BBEdit (née TextWrangler) for web maintenance for around a decade now, so it's the obvious choice for writing in a text editor. I'm also trying out Typora, a charming little application that renders Markdown as WYSIWYG as you type. It may be helpful to me to separate web stuff from writing stuff, especially since my habit with web stuff is to make incremental changes, save, and check obsessively that they worked the way I wanted them to. I'm a creature of habit, what can I say?

Posted by Asher Wycoff at 03 October

Email ThisBlogThis!Share to TwitterShare to FacebookShare to Pinterest
Labels: how

Other Places I Put My Stuff